Before going to the background of the video, let me time travel back in time…

My first memory of seeing a train,
Generally, all the kids like trains during their childhood and main reason for that is either their Father or Grand Father used to take them to nearby railway track and show them trains. How many of reading here will agree on that?

Same was the case with me and it was my Father on most of the occasions. For many, that kid who likes trains grows into adult and move away from trains. Well that is not the case with railfans, that kid continues to remain within them and follows trains. I continued to spend more time with trains all my childhood. One interesting event happened in 2000, I was caught by officials at Erode junction. They thought I had run away from home reason being they saw me the entire day at the station. Luckily for me, my brother was searching for me and he knew that either I would be playing cricket or watching trains.

Now, let us move 10 years down the line, 2010. The year I got the internet connection at home. I was fascinated by youtube and I decided to upload train videos in it. I asked my Appa (father) if he could come with me for capturing the Shatabdi near Bangalore city. He agreed and we went. Well first capture was not Shatabdi but Kurla Express and that was my first video on youtube..

Present day,
We (My Father and I ) were returning back from Hebbal after a hospital visit. We had planned to take the ring road route back home in order to avoid the traffic towards Makri side.  We were waiting for the signal below the hebbal flyover for taking a right turn when ALCO horns were heard. I was wondering what train it could be as no passenger trains are seen around 18 hrs. After 15 seconds it was revealed, my favorite shed ( Golden rock ) Alcos with a freight. I asked Appa ( Father) if we could chase it and he readily agreed and result can be seen in the video below.

We followed the train till the underpass near BEL circle then took a left to Mathikere for capturing it again.

Well, I am railfan today because of my Father ( He likes to see and capture trains as well ) and Family. I am also getting the same support from 44000+ people online. Thanks a ton for that J
Hopefully I will get the same support in future as well.

Presenting you the pictures from a visit to Makali ghats along with Vishnu, Prithvi, Amar & Pramath on June 25th 2017


2. We then decided to head the s curve which was clearly visible thanks to doubling work. Here
Valsad ( BL ) WAG5 twins with BCN was spotted along the way.


3. We took the route via old metre gauge alignment

4. The Next train on this list was Erode WDG3A with a mixed freight 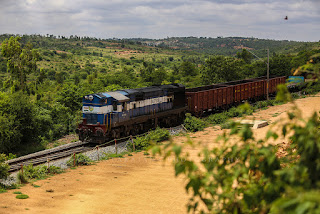 5. Next up was the King Karnataka Express with ALCO twins ( The prefect match )

6. It was time-pass till the next arrival

6. The weekly Jabalpur Yesvantpur Express was up next. Was expecting ALCO twins for this train

7. We then moved to Thondebhavi for Lunch, after which we climbed a small hill near by. Hubli WDG4 with a BRNA was the first spotting there.

8. It was big surprise seeing Bleed blue WDP4B with Yesvantpur - Ahmadabad Weekly Express. It was waiting to capture Bleed blue and Rajdhani combo but that will never happen.


9. Next was the train which got Electric link recently, KSR Bengaluru - Bhubaneswar Prasanthi Express with BZA WAP4

11. We were eagerly waiting for the next train. Yesvantpur Kacheguda Express


12. Orange always goes well with the Green. Yesvantpur - Jabalpur Express returns back but this time with ALCO twins

This trip was mainly possible thanks to Pramath and his loco.. 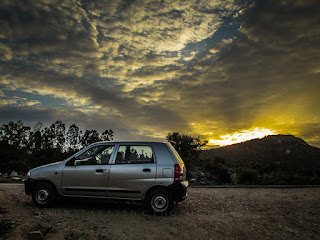 It was a wonderful day of trainspotting with friends. For people interested in seeing the video of the above trains.. This is for you

Thanks for watching till the end.. :)

Stay Alert - Railfanning is not a safe hobby !!

I open my maps app and check the distance to Hebbal from the place I was in a crowded bus on the outer ring road. It says 2 km and can be reached in 8 minutes with the current traffic status.
With every passing minute, it seemed impossible to reach according to prediction. All of a sudden,
my bus enters service road and Hebbal is reached by 20:10

The light would be perfect and I can immediately board a bus back home. The first problem started here,


The light from the advertising boarding on the flyover were switched off. The next option was the Hebbal station, walking along the track seemed too risky ( It was pitch dark and could see some guys sitting on the tracks. So a quick check on the NTES app ( Train was yet to depart from source ) and with the signal still in danger. I decided to head to the station by a small road next to the traffic police station.
I entered the platform and decided a spot next to the station board where there was good amount of light. I checked the Ntes app again and it showed that the train has departed on time which means it is expected any time now. I was facing towards Yesvantpur side and turned back to check on the signal ( if it has become proceed or not ). It was still Danger. I had crossed 2 guys while I was entering the station and one of them was standing on the opposite platform facing towards me. I got a doubt and turned back, saw the other person near the station.


My mind went straight to 2008 when 4 grownups corned me and my friend near Yesvantpur in the same manner. My friend lost his phone in that incident after a fight.

And I quickly realized fighting will not be a good option as I am not sure how many were around and clever thing to do was to head to a safe spot. Luckily since I was in the station, I headed straight to station master cabin which was just 100m away. Those 2 guys followed me until the cabin and stopped. One guy jumped into the bushes. The other guy came near me. He waited for some time to see if I was moving and since I was right in front of the cabin. He went out of the station. I waited there till the train passed and walked on the ring road to the bus stop. I was lucky to escape without any issues.

I initially taught of not mentioning this but since many people follow my work. I wanted to inform you all about this to be safe. Railfanning is not a safe hobby especially in India. Either an official will question (which is fine as they have the right) or the anti-social elements will try to take advantage of you.
So always choose a safe place for train spotting and always be alert of your surroundings.

The video during which the above incident happened

Need addition to my gear


Cameras that i use

The above links are affiliate links
Posted by Natarajan C at 10:57 6 comments:

With sanctioning of electrification on Yelahanka - Dharmavaram section, 2 trains were immediately given AC links and a plan made to capture the 2 trains with new link near Makalidurga. Plan was made to go by bike in order to have variety of spots to capture trains. We ( I and Rohit ) started from Bangalore by 6 AM. We decided to go to Ghati Subramanya for capturing the electric action. As we crossed Oddarahalli ( a station before Makalidurga ), the gates closed indicating a train. We were expecting Solapur or Bidar Express to turn up but instead it was the first sighting of Electrics with Freight, KZJ WAG7 twins slowly made its way out of Makali ghats and accelerated crazily out of sight. We then moved to Ghati, parked our bike and decided to climb on to a hill. The EMD roar started as we started walking towards the hill and it was Bengaluru bound Udyan Express, the train cleared Makalidurga via loop line for the reasons unknown. Meanwhile called up to Guru and Dheeraj about their locations who

were also spending their weekend with trains. A WAP4 honk was heard in the meantime and it was the Chennai - Satya Sai Prasanthi Nilayam Express with Itarsi loco. The train slowed down for a crossing and to our luck it was the other passenger train with AC link on this line, Hindupur - KSR Bengaluru passenger led by BRC WAP4. Video of the same can be seen below

It was back to back action after this. Bidar Express and Kondaveedu Express were captured from same spot. We then decided to head to Thondebhavi side for the next set of action.

We then spent some time at the above location and we also met Dheeraj and Guru here. The trains seen here were Kacheguda - Yesvantpur Express, Mumbai - Nagercoil Express, Vijaywada Passenger and Prasanthi Express bound to Bangalore. I and Rohit decided to head to Thondebhavi for breakfast where as Dheeraj and Guru stayed back. We then explored some location near by, Lucknow - Yesvantpur Express and Karnataka express with its customary ALCO twins made a wonderful sight. 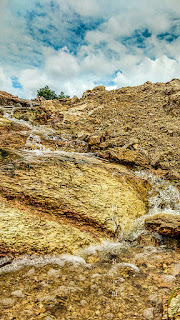 We then decide to head back to ride through the old MG alignment and as we were nearing Makalidurga we saw KZJ WAG7 twins with BTPN entering loop line for a crossing. The crossing train was Cement rake with UBL WDG4 twins. We then again explored the MG alignment like last time whose video can be seen below. 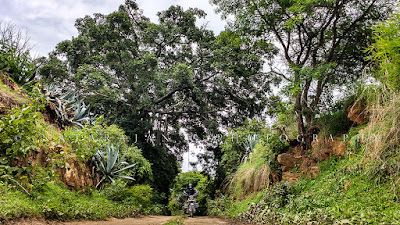 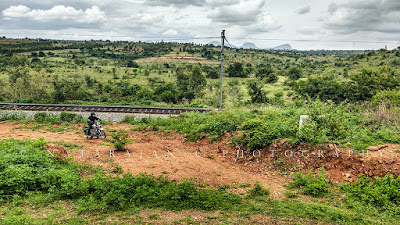 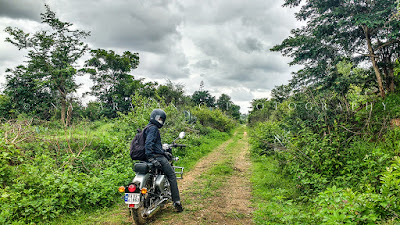 We also spotted a freight train going up hill, Mysore Jaipur Express during our adventure via the Metre gauge Alignment. We reached Odarahalli soon and made our next stop near Rajankunte to spot Yesvantpur - Kacheguda express. It was a great day once again. Hope you enjoyed the small report and pics. The train pictures and videos will be shared soon..

Day 1 -A meet after a long time

Video of the same can be seen below


Hope you all liked it. Share your comments and suggestions below.. :)
Posted by Natarajan C at 20:05 5 comments:

Doubling between Bangalore and Gooty - Updates

The much awaited doubling work between Yelahanka and Penkonda has started from today. I was onboard Hinupur - Bangalore Passenger.

Update from my friend who was on board Yesvantpur Indore Express that Land clearing work has started between Thondabhavi and Somashwara.

Landing clearing has been done in patches on Rajankunte - Dodballapur Stretch

Click here to view the doubling part in the video

The 13km Double line between Yelahanka and Channasandra has opened. First train to use the new line was 16591 Hubli - Mysore Hampi Express led by UBL WDP4B #40008. Action captured on the second day can be seen in the video below


Yelahanka to Yesvantpur : 80 % of the work completed
Platform 2 of Yelahanka Junction will be shifted a bit soon, work on that is underway

The blog will be updated as and when i visit the line...